Approaching 150 Miles for the Season

This outing closed January with our season ski total hitting 146.6 miles! At one time, my "season goal" was 250 miles - that is trivial, we will certainly crush that milestone. Our new, revised goal is to reach 400 miles for the season - now that's a challenge!

The Conditions: packed to packed powder the entire route - we are in need of some fresh powder on the trails which Mother Nature is sending our way today!

Friday morning Max, Zorro & I hit 20mph flying down French Gulch - top speed of the season!
The Siberian Excitement: it was a beautiful, sunny, blue bird day as we headed out skijoring French Gulch. It was a peaceful run as we cruised up the gulch. Gently gliding across the upper meadows, I noticed some wildlife tracks I hadn't seen before. Taking note, I thought, "I'll need to investigate what made those tracks later." Easygoing and focused - on we skied through the meadow. Then... KABOOM!!! Not more than 2 feet to our right, 3 white birds burst out of a bush and took off to the right. 2/3rds of our (once composed) skijoring team also launched to the right - BIRDS IN THE BUSH! FREEEEEE FOOD! At least I discovered what had made all those tracks in the snow...
My Siberian partners were chomping at the bit - "Gotta go this way! Get the birds! Get the birds!" A team organization meeting was in order to re-introduce all to skijoring...
Only Max & Zorro could make hitting 20mph the secondary highlight of an outing!

Posted by bperry at 7:56 AM No comments:

Conditions (as you can infer from the picture to the left): the conditions were light powder (2-4 inches) on well established trails up Boreas Pass Rd - most of the route found us in this type of established trail with the "snow wall" up to shoulder high on Max and Zorro. As we reached the upper elevations (the last mile or so) the trail became less established but still visible in 3-6 inches of powder.

Posted by bperry at 7:38 AM No comments:

Monday & Tuesday left over 2 feet of snow in the Breckenridge area. Wednesday we woke to more snow falling - Max, Zorro and I said, "we gotta skijor this big powder event!" So, we headed out to French Gulch Wednesday morning. 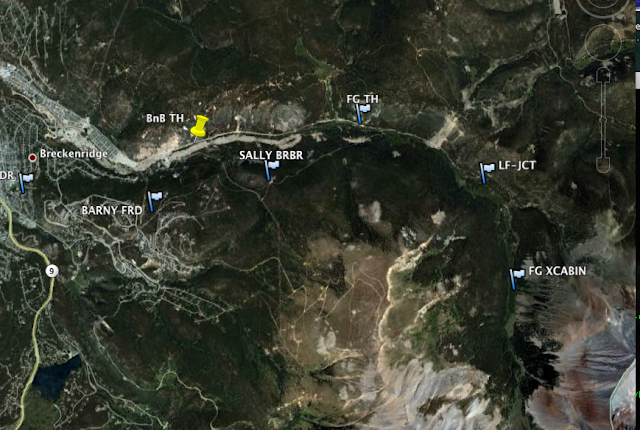 Posted by bperry at 8:43 AM No comments:

Friday (Jan 14th) found Max, Zorro and I exploring new terrain in Little  French Gulch. Highlights of the exploration:
Details of our route (see image below): (1) started at the French Gulch winter trailhead (FG-TH) and skijored up to the Little French Gulch junction (LF-JCT); (2) left onto the Little French trail; (3) continued up to and past the Little French Crosspoint (LF-XP); (4) no tracks from here: blazed our own trail (in waist deep powder) up the ravine behind Little French Gulch to LF-CLRNG; (5) took a break to rest the human and then sprinted back down the ravine in waist deep powder to the crosspoint (LF-XP); (6) hung a left at LF-XP and skijored up to the LF-PATH point; (7) rested the human again, decided we better conserve the human and started back down (to LF-XP to LF-JCT to FG-TH).
Coming down from the LF-PATH point to LF-JCT was highlighted by 2 major events:
Vital Stats: 6.8 miles; 2hrs total; 95min moving time; 4.3 MPH moving average; 19 MPH top speed!!! 1900 feet in total elevation gain... Fun!

Posted by bperry at 8:40 AM No comments:

Saturday morning found Max, Zorro and I hitting the trails to skijor from the Indiana Creek trailhead up to Boreas Pass Rd and then down to the Boreas winter trailhead.

These conditions meant a fast-paced route as we ascended from Indiana Creek to Boreas in 55 minutes (climbing over 1200 feet elevation in 3.3 miles)!

Top "wish I had a wearable camcorder" moment: as we were climbing up Indiana Creek a misinformed squirrel hopped off a low tree branch, onto the trail and sprinted about 15-20 yards up the trail (before finally getting informed and getting off the tail). The skijor engine (Max & Zorro) kicked it into overdrive and I was in a "downhill tuck" going uphill!  Woo!

Posted by bperry at 8:03 AM No comments:

We set out this morning to skijor up & back on Indiana Creek.

Conditions were beautiful! We have had a few inches of fresh snow in town each of the past few nights and we found that this translated to much more fresh, untouched snow at elevations over 10,500 feet!

The first mile from the Indiana Creek winter trailhead was well-traveled and packed powder. After the first mile there is a junction to either continue up Indiana Creek (towards Dyersville) or fork onto the Pennsylvania Creek trail. The latter (forking onto Pennsylvania Creek) is the more frequently used cross country ski route. As we veered toward the Indiana Creek route we were happily met with ZERO TRACKS - fresh, untouched powder for us to blaze for the next 2 miles!!!!


The conditions slowed us a bit (you try blazing 2 miles of trail through deepening powder) but there was not a complaint from any of us - just huffing, puffing, tail-wagging smiles. The only thing we encountered for this 2 miles up and then 2 miles back were the frequent tracks of snowshoe hares. Some of these tracks must have been fresh as it took all the "listening skills" Max & Zorro have to keep on trail and not follow some of those tracks!

Number of Visitors to this Blog: